I was interested to see the recent announcement of the quarterly Irish crime statistics for Q2 of 2011 by the Central Statistics Office.  The press surrounding this latest information hailed the quarter-on-quarter reduction in crime across all categories (for example, from the Irish Examiner).

So, I thought that I would grab the CSO figures and run them into QlikView.  You can download the resulting document from QlikCommunity. 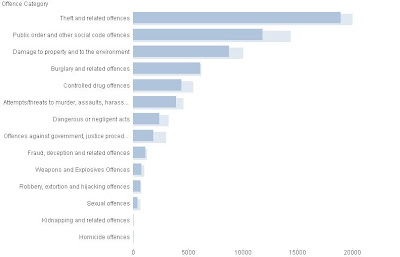 It does indeed appear that the crime figures are down across all categories.  Of course, one swallow does not make a summer and neither does a change between one period and another indicate a trend.  This is where a control charts come in most usefully - is there a downward trend?

Looking at the national figures in a control chart, it does look like there is a steady downward trend.  The latest figures have dropped below the control limits (my limits are based on the 2006-2008 data).  There is a certain seasonality about the crime figures so I have added a 4 period mean here.  Even that appears to be dropping.  Looks like the police are doing a great job.

I thought that I might have a delve around in the figures and thought about which if the different crime categories would be more of a concern to me.  For example, I am not terribly worried about public order offences, but I am a little more worried about my car being broken into.  I don't worry about homicide (Ireland has one of the lowest rates in the world) but I do have concerns about being assaulted.  There are some crimes that are more "personal" than others. 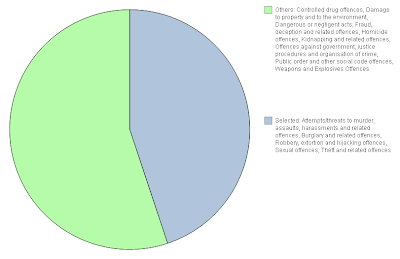 If I break down the categories into the ones that I am more concerned about (assaults, burglary, robbery, theft, sexual assault), I see that these represent 45% of the total figures for the whole data set.  Interestingly, this is now 48.6% for just 2011!

When I look at these categories in the control chart, I see that these are not decreasing.  They are steadily above the mean line for the last 16 quarters.  While some have associated increases with the recessionary times, it appears that the increase started in 2007 - a year before Lehman Brothers collapsed.

So, while the Gardaí (Irish police) are doing a good job in reducing crime in some areas, there are some that perhaps need more attention.