Collaboration? Or persuasion and excuses?

Collaborative BI - it is one of the new buzz topics in Business Intelligence.  But what does it really mean.

The good folks at Merriam-Webster define collaboration as:

Which is a pretty broad definition. Within BI, that can probably mean many different things, from sharing the results of data discovery with your team via email, posting an Excel file on SharePoint, or putting up a PowerPoint at a group meeting - face-to-face or Web-Ex.  There are a gamut of existing tools to support this endeavor.

I do believe that people do this all the time.  People share information from BI tools with each other.  What I am not sure about is how "collaborative" it is.  Are people sharing information because they are sharing a common purpose, or is it because they are trying to persuade people to their point of view?

The Psychology Wiki page on Collaboration has some interesting definitions of preconditions for success in collaboration.  One of which is shared objectives.  They also talk about barriers to collaboration such as reluctance to share; another is hoarding - people hoarding information as a source of power.  I guess that if an organisation has difficulty with shared objectives and people hoarding or reluctant to share then no BI solution in the world is going to help them get over that!

Funnily enough, one of the collaboration features that I have pretty much never been asked for by prospects and customers is the ability to have shared sessions on a BI tool.  Nobody ever said to me, "can we have something like Web-Ex built into the tool so that we can share sessions with other people".  That is one of the main "collaboration" features that comes with QlikView v11.  I think that it is a good feature to have, but I am not sure that it is something that people will use to choose whether to make a purchase decision over a competitor.

One collaboration feature that I have quite often been asked for over the years, and QlikView have also introduced in v11, is the ability to add commentary (called "Annotation" in QlikView 11).  I am not a fan of commentary.  One of my clients has a great name for it - he calls it "excuses".  People rarely add commentary (or at least don't add very long commentary) on green traffic lights.  It is the red light that gets the commentary - "why we didn't make the numbers".

So far I am still to be convinced that collaboration features like this are going to be a really big deal in BI (although the marketers may make it so!).  I don't believe that it really is reflective of how people work in the real world.  There are some problems around the way people work together collaboratively, and those aren't going to be solved by a software solution - no matter how cool it is.

Stephen Redmond is CTO of CapricornVentis a QlikView Elite Partner
Follow me on Twitter: @stephencredmond
Posted by Stephen Redmond at 18:43 3 comments:

It is amazing to me that I can work with a product like QlikView for 6 years and still come across new things all the time.

Recently, my good friends The QlikMonkey, posted a visualization about why the soccer team, Manchester United, lost the English Premier League: 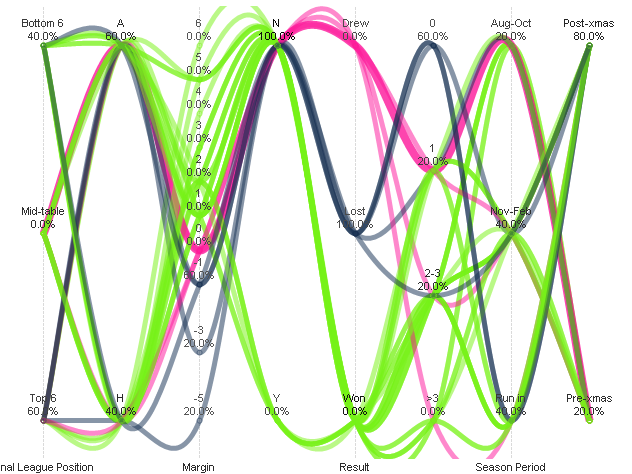 They were also kind enough to share some other work that they had done to create similar parallel coordinate charts like this.

One of the things that I noticed about it was that some of the lines had different widths - I hadn't known that we could do this in QlikView!!!

I had always known about the different options that we could add expressions to under an expression in a chart, e.g. Background, Bar Offset, Text Color, etc.  One of those is "Line Style".  I had thought (and this is correct) that was to do with creating different types of line such as dashed.  I didn't realize that we could also use this property to dynamically change the widths of lines.

This is from the QlikView Help file:

"The relative width of the line can be controlled by including a tag <Wn> where n is a multiplying factor to be applied on the default line width of the chart. The number n must be a real number between 0.5 and 8. Example: <W2.5>."

It occurred to me that I might be able to use this feature to replicate one of the classic charts in visualization history - Charles Minard's chart of the losses suffered by Napoleon during the disastrous Russian campaign of 1812/13, which he drew in 1869.  Even Edward Tufte, one of the modern-day guru's of data visualization, described this as "probably the best statistical graphic ever drawn".

I created a data set of X, Y coordinates along with the volume of soldiers for each point (field called "Count").  A separate set for each direction (and spur line).  I then created the line chart and used a % of the Max value to calculate the appropriate "W" value for the line:

And here are the results: 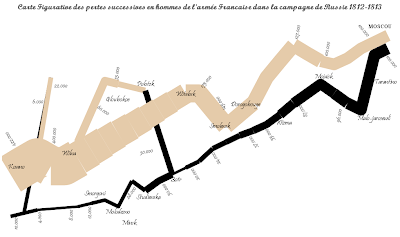 Obviously this is not an exact replica.  If I was doing it again, I would include more data points to get finer detail.  But as a proof-of-concept, I believe it is a good enough effort.