So, how should we measure the measures?  How do we define success in a data viz implementation - using Qlik or otherwise?

Is success a pass through the UAT process?  If the client has paid the bill, does that imply success for the contrator?  Do we ever go back and find out?  What kind of post-implementation evaluation do we do?  I know that I can tell you anecdotes of several enormously successful implementations where tthe client has achieved great ROI - but I can't tell you that I learned of these by any great process of measuring that success.  Nor can I tell you about the implementations that were less successful,  or were enormously successful but we never recorded it - these have not been measured and have faded from memory.

At a basic level, a data visualization can be considered successful if the values that are being encoded can be decoded by the user. No matter how slick and technologically advanced the implementation, if the values are not decodable, then that is a fail.  However, that decoding process may be intuitive and easy or it may be complicated and hard - just ticking the box on the ability to decode can't define success.  Do we need to take the success measure up some levels and consider the user experience?

So, our measures can be decoded correctly and the users are happy with the experience.  Now, how do we confirm that the measures that we encoded were the right measures in the first place?  How well were the project goals met?  Are the users even using our wonderfully crafted displays at all?  Or do they simply go straight to the pivot table every time and spend five minutes every morning getting the measure that they actually needed?

If we have been through the process of scoping the project correctly then we will have created a list of measures and key indicators that are correctly linked to the strategic aims of the organization.  But we should go further.  We should create a list of measures of success of the implementation.  Some may not be 100% accurately measureable, but the questions should be there.

Of course, these measures of measures are not just used as a success criteria, they become part of a feedback loop of change and improvement where there are always new goal to achieve.

We should always keep measuring the measures.

One of the options in QlikView line charts is to apply a smooth option so that lines look nicely curved rather than ugly and jagged. However, while it can be aesthetically pleasing, it can also be a distortion of the data.

An interesting aspect of this distortion, and one that many designers might not think about, is how we deal with interpreting curved lines that are tracking along similar paths - for example, sales versus budget. Have a look at such a chart: 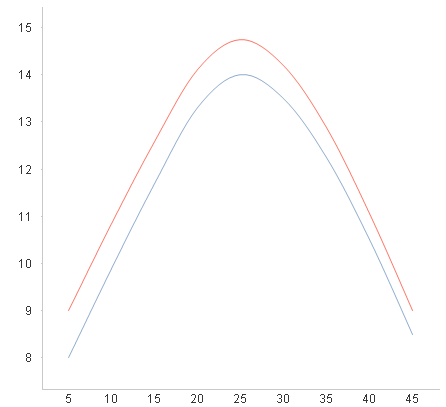 Now, if I was to ask someone where these lines diverge the most, the average person will suggest that the largest gap is in and around the apogee of the curve. But it's not correct! Would you believe me if I told you that the largest divergence is at the start and that the difference at the apogee is actually half way between the maximum and minimum? Here is the data:

The line chart below may be a better representation: 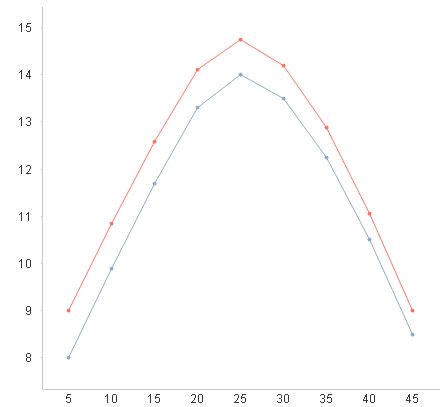 Here there is still the temptation to look at the distance between the lines but at least we have the points to help us. We could even add some further clarity using a combo chart: 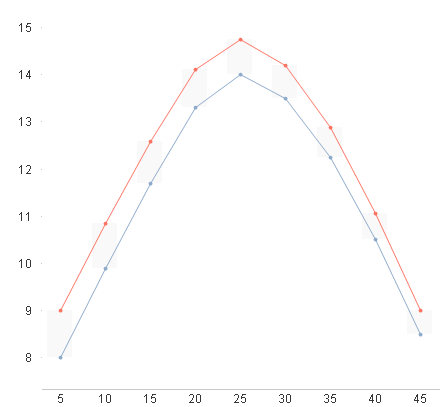 It may not be ideal, but using the gestalt principles of enclosure will at least direct our visual system to the connected dots and give us some better understanding of the differences.

You might even get away with putting the curves back in! 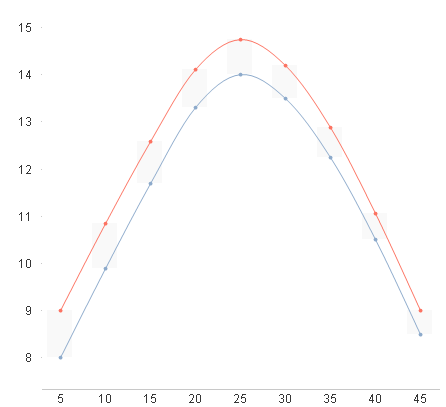 Back in March, I published a post on calculating the same day last year.

In a recent post on the Masters Summit for QlikView LinkedIn group (the group is only open to previous attendees - yet another good reason to attend!), someone was asking about the subject so I shared a link to my original post. Another member queried the logic and suggested that it only works "75% of the time".

I expanded a bit on my logic from the original post, so I though that I would update it here for public viewing.

I believe that the logic doesn't break down - ever.

In this fashion, the Date-364 calculation is always correct (leap year, 53 week year or otherwise) because it always gives you the equivalent day one year ago.

For your pleasure, here is a small script that you can run in QlikView or Qlik Sense to compare the like-for-like dates for the last 100 years: