They are all wrong!

The correct place to put the QlikView list box is on the right-hand side of the screen.

In CapricornVentis, we have been doing this now for several years.  When delivering designer training courses, we tell all the delegates that this is the correct side of the screen to place list boxes.  We have several customers who have adopted this as their corporate standards because they believe that we are correct.  We are.

Why are we correct?  There are two simple reasons - one of which is "design 101", the other is more subtle.

The "101" reason is a basic tenet of screen design.  The top left-hand side of the screen is the primary piece of real-estate.  This is where the eye immediately heads when you open a page.  Therefore you need to put your primary information display element - charts - starting in the upper-left corner.  Not list boxes, and especially not logos!

The subtle reason goes with the use of a right-handed mouse (the majority of users).  In a very subtle way, right-hand list boxes suit their eye and their use of the mouse.  They do not have to "cross over" the data with the mouse pointer.

This point is so subtle that it wouldn't, in itself, be strong enough to back up my argument.  However, the advent of mobile technology - especially tablets - adds some more backbone to this argument.  The reason being that the user is not just pushing the mouse across the data, they are using their whole hand - which blocks the data!

Look at this image: 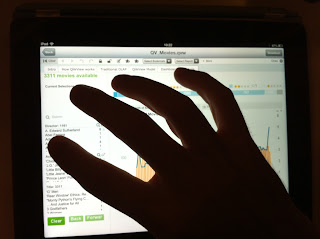 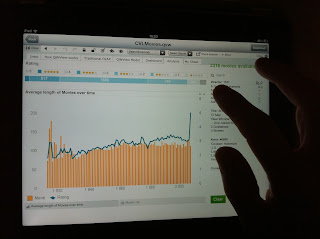 The user, while comfortably resting his hand on the edge of his tablet, it able to make multiple selections with ease.  The data changes before his eyes.

Stephen Redmond is CTO of CapricornVentis a QlikView Elite Partner. We are always looking for the right people to join our team.
Follow me on Twitter: @stephencredmond
Posted by Stephen Redmond at 19:27 9 comments:

This is a little off topic, but I thought it would be useful to post here.

I recently updated my home PC from Windows 7 to Windows 8.  The PC was only a month old, so it made sense to take up the low price offer.

I eventually worked out that this message was actually a red herring.  The PC has the newer UEFI bios so it should attempt to boot directly into the Windows boot manager.  The error I was getting was actually because this wasn't happening and the startup options were falling through (down past CD, USB, etc.) to the legacy disk option.  This obviously wouldn't work because it wasn't set up for it.

Having identified the problem, I then tried to get online and find the fix.  Unfortunately, this wasn't as easy as I expected so this is why I am posting here so that others may find it on Google.

The usual type of fix for this were to boot off the Windows CD and run the Command Prompt and run a command like this:

However, this returned the error:

The boot configuration store could not be opened

This was quite strange.  I could see all the files on my drive and could see that all the partitions that were supposed to be there were there using DISKPART.

Other suggestions were to run this set of commands:

Other sites suggested that I should make the System partition (the 100MB partition with no drive letter that Windows 8 uses  to store the boot files on a UEFI system) Active using DISKPART.  However, when I tried this I was told that my drive was not an MBR - is isn't, it is GPT.

At this stage, I thought that I should just cut my losses and try a refresh install.  However, when I chose this option, I got the error:

The drive where Windows is installed is locked

Now this didn't work either, I got:

There was an option to use a /S to specify where to copy the boot files to.  However, I wanted them to be copied to the system partition which doesn't have a drive letter.  So, I used DISKPART to assign the letter Z to volume:

Then I could use BCDBoot to run this:

Lo and behold, my system now boots!  To say that I am a bit frazzled, after a couple of days of family members looking at me expecting me to be able to fix this issue, would be a major understatement.

I hope this helps someone.