A friend of mine recently shared the following chart on LinkedIn: 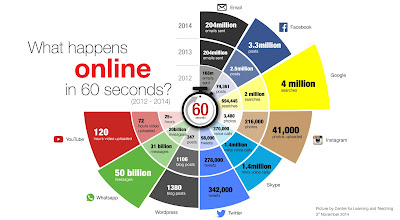 I believe that it may originate from the Centre for Learning and Teaching in Hong Kong and may have been a student project. I wonder what the grade was?

Unfortunately, this chart is not a great way to represent the data from a purist dataviz point of view. Polar charts like this are often a poor choice for most uses, in a very similar way to pie charts with lots of segments. In this case, the scales are all over the place so it is really difficult to use the graphic to tell me where the segments with the largest values are. For example, the largest segment seems to represent the 4 million Google searches which, by area, appears to be twice as big as the 3.3 million Facebook posts and it is also much bigger than the 50 billion Whatsapp messages! The 41,000 Instagram photos segment is bigger than the segment of 215,000 for the previous year! It is also way bigger than the 1.4million Skype calls right beside it. I can't really trust the size or position of any of the segments to relate any information to me.

The earliest recorded case of a Polar chart was the one created by Florence Nightingale in 1858 to demonstrate the causes of mortality in and around the Crimean campaign: 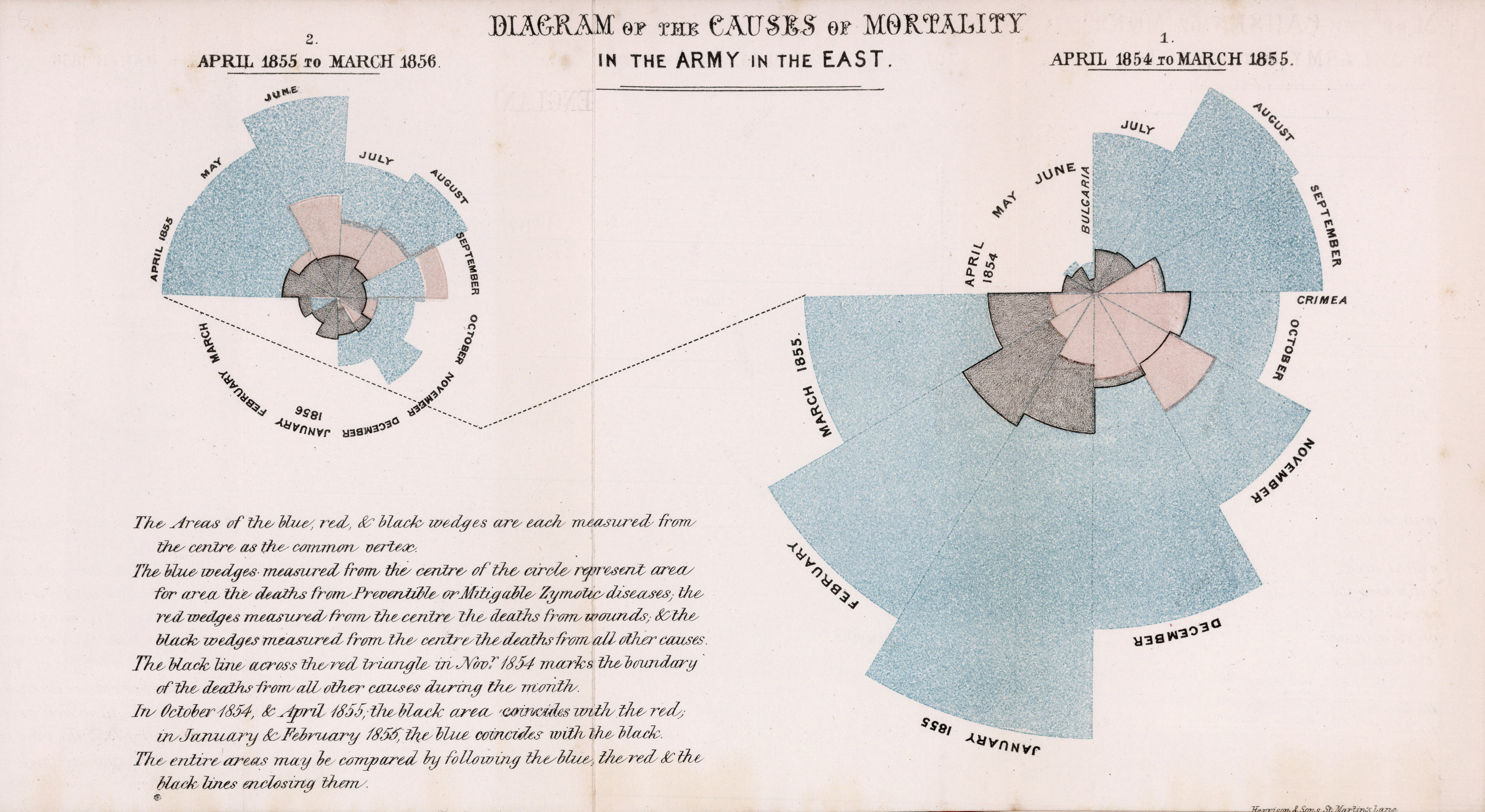 This was a revolutionary chart in its day. It was very easy to see that the largest cause of death to British servicemen was actually from preventable disease rather than from wounds or other causes of death. But, while we can see the story from the sheer amount of blue ink on the chart, can we discern anything else - is there any pattern or trend. I wonder if this is the best way to visually represent the data.

QlikView doesn't have a polar chart but we can approximate one with a radar chart: 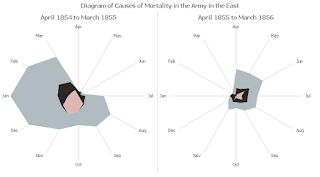 Still not idea. We are still looking at lots of blue, but no trend. Perhaps a stacked bar chart would be useful? 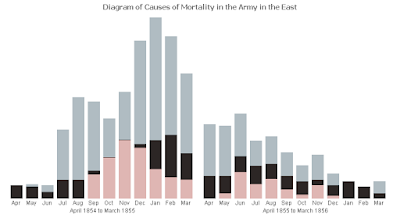 This is good because we can see the overall trend. Although, one of the problems that stacked bar charts have is that we can only clearly discern the trend of either the whole or the bottom bar of the stack (Wounds). We can have difficulty seeing the trend of the middle (Other) or top (Disease) bars.

Another way might be to try a Redmond Profile chart: 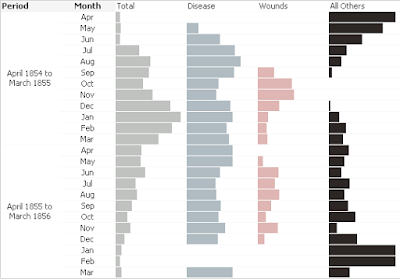 The profile chart shows us the trend of the whole and then shows the % split of each of the parts. This is useful but maybe still not ideal for this data-set. There is a variation of the Redmond Profile chart that might work here: 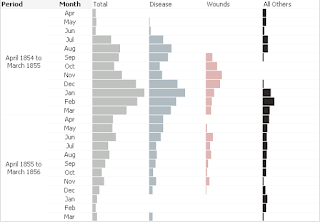 In this case, the profile bars, instead of showing the % share of the values will show the actual value. In this way, we get to see the trend for the whole as well as the parts in a way that the stacked bar chart doesn't do.

If I was a gourmet chef, I might call it a deconstructed stacked bar chart.

There you go, gourmet data visualization.

Today is a day of mixed feelings. I am excited because on Monday I will start a new career away from consulting. I am also sad because I am leaving behind a company that I have worked for since 1999 - over 16 years!

The last 16 years have been quite a rollercoaster and I have met, worked with, and drank with, some really great people. I have interacted online with so many other nice people who I have yet to have had the pleasure of meeting face-to-face. I have got to travel far and wide - from Seattle to Seoul - and I have attended some great events - from the old SalesLogix partner events in the early days to the Qlik Qonnections events in more recent years.

I need to give special thanks to all my colleagues at Capventis over the years. All of them have helped me grow by challenging me to be the best that I could. It has been my pleasure to have worked with an incredible bunch of smart people.

I am leaving a much bigger and stronger organisation than the one that I joined so many years ago. I know that they will continue to grow and continue to succeed into the future.

Stephen Redmond is author of Mastering QlikView, QlikView Server and Publisher and the QlikView for Developer's Cookbook

Posted by Stephen Redmond at 11:37