Bricks on maps instead of circles

In his recent newsletter, Stephen Few introduces the concept of using bricks as "A New, More Perceptible Method for Encoding Quantitative Values in Geospatial Displays".

Now, I am not a fan of geospatial data visualizations at the best of times and have blogged and tweeted about that in the past (for example, see Do we really need maps for analysis?)  I particularly don't like the ideal of using bubble size to encode value on a map so the idea the bricks might be a better idea was intriguing.

Stephen uses a map of the US and juxtaposes the use of bricks with another map using circles to contrast.  It is quickly obvious that the bricks are much easier to compare, say, Washington State with Florida.  With the circles it is difficult to perceive the difference.  With the bricks, one can see the difference easily.

Inspired by Stephen, and challenged by Brian Dunphy on Twitter, I decided to have a go at doing this in QlikView.  It was a fair challenge and helped me build up some skills with using the jQuery library (which is embedded with QlikView in version 11+ so you don't need to load it separately).  Here is the result (using the old QlikView Google Maps demo document of London properties): 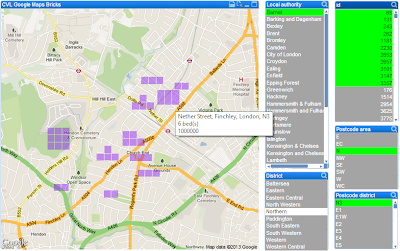 Not bad!  But I quickly noticed a problem with this application, which Stephen mentions in his article. When circles overlap, they are still legible.  When the bricks overlap, they become completely unreadable! 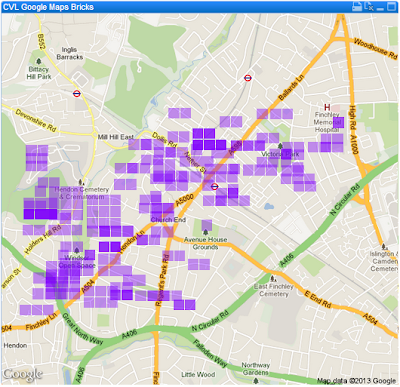 Stephen Redmond is CTO of CapricornVentis a QlikView Elite Partner. We are always looking for the right people to join our team.
Follow me on Twitter: @stephencredmond
Posted by Stephen Redmond at 21:28