In this post, I'll look at the recipe on using TOTAL to calculate the percentage of total and subtotal.

I like this recipe because it really helps to understand the power of the TOTAL function, which has been a core part of Qlik for a long time, pre-dating Set Analysis for use in vertical calculations.

We start off with a simple set of Sales data:

Then we need to create a Pivot Table with Country and City as Row Dimensions and the following 3 measures:

Set the display format of the two percentage measures to an appropriate % format. Turn Show totals on for the Country dimension.

When the pivot table first displays, the Country dimension will need to be expanded to show the cities. 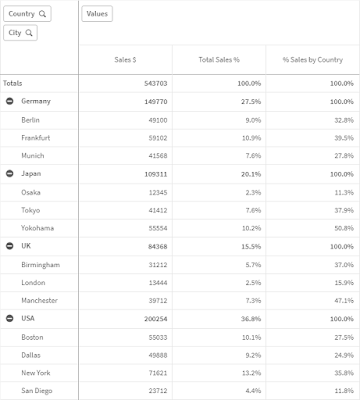 Hopefully it is straightforward to see what has happened here. Total by itself tells the function to ignore the dimensions in the chart. Therefore the Total Sales % calculation takes each individual sales total and divides it by the overall total. So, for Berlin, that is 49100 / 543703 = 9%.

Posted by Stephen Redmond at 21:15