Colour is an important variable to consider when designing a visualisation. A lot of Qlik developers, if we think of it at all, will think of colour in terms of a mix of red, green and blue - each of them usually as a numeric value between 0 and 255. A lot of web developers will think hexadecimally - #00 to #ff, with the R/G/B being expressed as a hex number like #00df87.

There is another way to think of colour, especially when thinking about how to represent scales, and that is to consider hue, saturation and luminosity.

Hue is what a lot of people will think of when they think of colour - almost the pure wavelength of the light spectrum, running from red to green to blue:

But is is actually a loop, because the blue runs back through to red again. Perhaps it is easier to represent as a circle (indeed, the CSS hsl function uses a value between 0-359, representing degrees on the colour wheel): 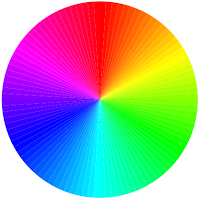 A changing hue is used by some designers to represent a scale - the so-called "rainbow scale". However, this is wrong on a number of levels. Not least of these is that there is no well accepted norm to say that red is low while blue is high and green is in the middle. Of course, we also have to remember the we need to design visualisations that may be used by people with colour blindness. Therefore, if you are representing a single climbing or falling scale, you should really just stick to a single hue value. If you are creating a diverging scale, then two hue values can be used.

Saturation means the level of saturation of the hue relative to grey - how much colour is there. This can be seen in the standard Microsoft colour picker: 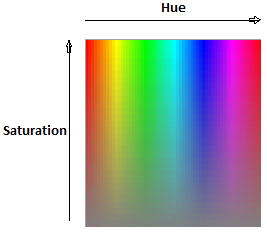 So, we can see that, for each hue, the less saturated then the more grey. Very low saturation for any hue will effectively mean just grey. So, saturation is potentially useful to represent a scale - with a single hue (for example, green):

One thing that we should be aware of is that it is not possible for us to see subtle differences in the saturation, so it is always better to have a stepped scale, with 10 steps being an absolute maximum (colorbrewer2.org uses 9 as a maximum for this!):

Luminosity defines the levels of light that are emitted. We need to be careful here because this is often confused with brightness. However, luminosity is something that can be objectively measured but, like saturation, brightness is a subjective human measure. We can use luminosity as a scale:

As with saturation, we should consider using a stepped scale:

So, why would we worry about HSL? Because they are easily programmable! In both Qlik (all of the images here are built in QlikView using the HSL() function) and web/css technologies, there is a HSL colour function that will accept a hue, saturation and luminosity value. Even better, in both cases, the saturation and luminosity values are represented by percentages - which are ideal for calculating scales.

Posted by Stephen Redmond at 15:36